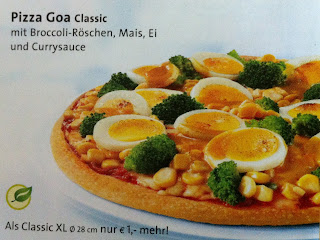 The other morning I sat down to breakfast with the morning newspaper and a flier for a local pizza delivery company fell in front of me. One glance at the pictured specialties and I lost my appetite for the eggs on my plate.

A large photo featured a pizza with hard boiled eggs, broccoli, corn, and curry sauce! Seriously? Does anyone eat that? With a little imagination I can believe people might like curry sauce with chicken and pineapple on their pizza - but eggs and broccoli?! No. Thank. You.

Glancing through the Joey's Pizza ads, I found several combinations that challenged culinary couth. How would you like steak, asparagus, and Hollandaise sauce on thin crust? Feeling a little dull? Try the sharp edge of a "Pizza Hot Conchita" with spicy BBQ sauce, hamburger, bacon, red onions, Mozzarella, and chili peppers. And call the fire department. 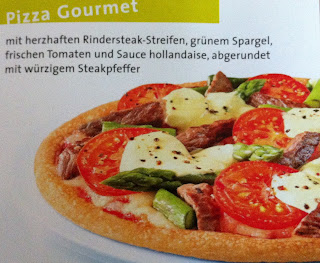 Flipping through more pizza menus, I had a flashback to the first meal I shared with my host family in Germany as a 16-year old Congress-Bundestag Exchange Student. The day I arrived, they took me to a festival along the beach near our home on the Baltic Sea, then out for dinner at a local Italian place. Since I didn't speak any German, I opted for the first thing I was certain I understood on the menu: Peperoni Pizza. I really couldn't understand why my host brother seemed so surprised and asked me if I was sure that was what I wanted. Until it sat before me. I quickly discovered to my horror that "peperoni" in German is not at all the same as "pepperoni" in English. Rather, in Germany, this is a hot green chili pepper. If you want the traditional American pizza topping, then you need to order "Salami." I've tried to warn unsuspecting tourists about this, but it never fails that visiting friends forget, and order a pie full of hot peppers.

After seeing the flier with hard boiled eggs on pizza, I jumped online and surveyed my Twitter friends for the strangest pizza toppings they've found outside the US.  I got some interesting feedback! Here are a few of the oddities people have encountered around the world: 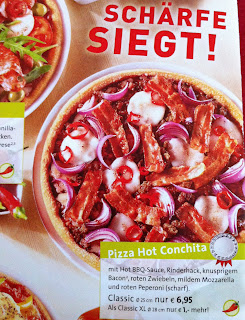 I can be adventurous with food. So I'd be willing to try a few of these, but some topping combinations are just too much of a challenge to my open-mindedness.

What are your preferences for pizza? Anything you've seen that made your stomach turn over? I'd love for you to share your thoughts and experiences!


Photo Credits & Disclaimer: all photos are from advertisements for Joey's Pizza in Muelheim an der Ruhr, Germany. Joey's has not sponsored or endorsed this blog in any way. I have not actually tried any of the mentioned pizzas.
Posted by ~Karen at 9:11 AM