Looking Back on a Year: Birthday Reflections 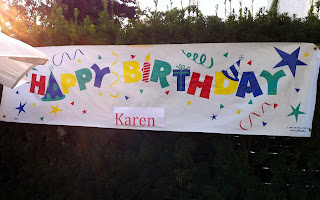 Yesterday I celebrated my 43rd birthday. The day was fantastic, and I'll get to that in a moment. What is important for me now is that it marked an occasion to review and evaluate the last year. This past year has been, hands down, the most difficult year of my life. It was filled with tears, heartbreak, frustrations and desperate moments. But I made it through, and recently have found more frequent days of hope and happiness. So on this particular birthday, I had a lot to celebrate. Here's a little recap of the incredible 12-month journey.

On August 1, 2011 I signed the papers closing the sale of my beautiful home in Maryland where our family had lived for eleven years. Several days earlier all the contents had been packed onto a 40' container and sent ahead to Germany. My kids had also departed for Europe and were staying with their grandparents on the Baltic Sea. My husband and I remained with friends for a few days to settle affairs and say our goodbyes.

On August 4th we flew to Hamburg, stayed for a night, then drove to North Rhine-Westphalia, where, during a house-hunting trip a few weeks earlier, we had made an offer and begun the contract process to buy a house in Essen. We were expecting to finalize the deal and move in within a week or so.

However, after arriving in Essen, we learned that the person with whom we had negotiated the house purchase did not possess the appropriate inheritance paperwork required for him to legally sell it (The Housing Crisis post). For the next several weeks, we were left in limbo: homeless with our container sitting in port storage amounting massive daily fees as we had no place to unload our household goods.

With the start of school looming and the prospect of finding a home looking impossible, I was sure I had made a monumental mistake by moving my children overseas. I had no way to provide for them, no place for them to live or go to school, not even access to their clothes and other things we shipped. I had failed them and was already desperately homesick. By my birthday at the end of August one year ago, I was severely depressed.

By the grace of God, we found a rental home in September and things started to look up. The house was under renovations, had no lights or kitchen, but we had a permanent address and were reunited with our belongings. The kids started school and by end of October we had completed unpacking, had phone and computer lines, and a kitchen (Kitchens, Closets, and Light Fixtures post).

In November, I was feeling very lonely, had not really made any friends yet, and was still homesick. As the new year arrived, one child was struggling so badly in school that we had to move him to a different school system. All the children were overworked with school, tutors, and social adjustment in a new language and culture (Helping Teens Transition post). I was overwhelmed trying to support them and feeling isolated. Most of the time, I hated being in Germany. The incessantly cold, rainy weather didn't help.

But as Spring approached I connected more and more with some friends I made through the Expat community (Expat Resources post) and a couple parents from the kids' friends. I was able to get out more socially, began exercising regularly (Will Walk 1000 Kilometers post), kept busy with a part-time tutor job, and began blogging for personal therapy :)

Summer came, the kids all passed their classes, my brother and his family visited from the States, and then we ended the year with an amazing dream vacation to the Maldives (more on that another time).

Then yesterday was my birthday. Just over one year since we moved. And it was a wonderful day from start to finish. Two nights ago I met up with a German girlfriend early in the evening - just wanting to catch up after not seeing each other most of the summer. Claudia made a wonderful salad that we enjoyed with a couple bottles of wine outside on her beautiful roof-top terrace. We had such a great time and talked so long that it was suddenly midnight, and we ushered in my birthday with a toast to all that I've survived in the last year and hope for a much better next year. I went home very reflective of what a significant year it has been. 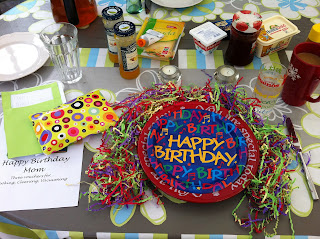 When my children awoke me early yesterday, they had set the table outside for breakfast, decorated my place with the red You Are Special Plate, gone to the bakery for fresh Brötchen, and made my coffee. I was regaled with funny home-made cards and thoughtful gifts. Later in the day, I was ready to get moving and set out on what has become my "usual route" for an 8k jog. It was the first time I had been able to do that in at least 5 weeks and it felt good to return to "my woods" and "my river." I was acutely aware of how these places felt like part of me, and that I was feeling at home and even missing Mülheim after my absence. Wow.

For dinner, we grilled burgers and again were able to eat outside because the weather, in a rare streak, has been sunny and warm all week. This might have been the best birthday present :) But my celebration didn't end at dinner. After calls from three different German friends to congratulate me, I headed to a favorite local beer garden and restaurant where six of the wonderful Expat women who have become among my closest comrades in this adopted homeland treated me to an evening of cocktails, conversation and fits of laughter! (Special thanks to Emma, Julie, Rachael, Rebecca, VeDonna, and Verena for a fantastic, fun evening!)

I suppose its true that time heals all wounds. And sometimes it doesn't even take as long as we might think. A year ago, my heart and soul were deeply wounded. Today, I am well on my way to a full recovery. I feel grounded and even happy. I'm aware of my abundant blessings. And thankful for my life.

Email ThisBlogThis!Share to TwitterShare to FacebookShare to Pinterest
Labels: celebrations, my stories