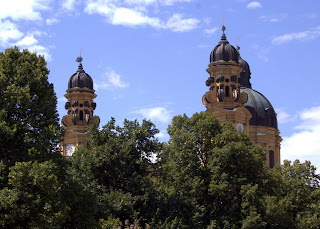 Summer is here! Well, sort of. The calendar says it's summer. And finally the schools have capitulated and released our kids for six weeks. The weather...well that's still holding on fiercely to a cool rainy spring program. Nonetheless, with the young ones out of classes, it's time for our travel season to begin! First up: Munich.

My oldest two children are getting a bit cheated this summer. They have to spend the first three weeks of break in a different kind of school: intensive language camp. They moved to Germany as high-school aged teens and were dumped into a traditional Germany college-preparatory in the manner of "sink or swim." Although they were made to repeat a year of school in the name of "catching up" with the language, it was evident at the end of the academic year that they still needed a lot more help improving their vocabulary and strengthening grammar. Understand: they did amazingly well under the circumstances, passing all of their classes and maintaining in some cases better grade averages than their German peers. But they want to and can do better. So we enrolled them in a program through the Humboldt-Institut that offers 30 hours per week of intensive German language training to kids aged 15-18 years old. The camp operates out of a Youth Hostel in Munich, so we drove them there this weekend to drop them off. 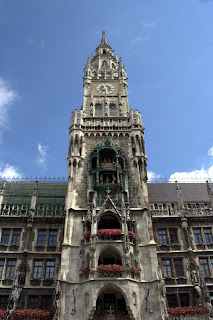 It was a great chance to tour the beautiful city, spend quality time with my girls before their camp started, and visit with two of our former YFU exchange daughters. Despite grim forecasts, the weather in Munich cooperated beautifully for our visit and both Saturday and Sunday we were graced with a fair amount of sun and moderately warm temperatures (low to mid 70'sF or 22-25C).

Since Saturday was the first day of Summer Break for North-Rhine Westphalia, we set out by 3:30 am to beat the anticipated heavy traffic. It was well worth it, as we made the drive straight through in about six hours, arriving in time to meet our Italian daughter, Tamara, for breakfast (she had taken a bus up from South Tirol, also getting in about 9:30am). We indulged in scrumptious Nutella-filled French toast at the lovely Richart Cafe in Marienplatz - I highly recommend it! - with perfect views over the square to the Town Hall with its famous musical clock tower (Rathaus-Glockenspiel). After breakfast, we got out in time to watch and listen to the Glockenspiel which plays for about 15 minutes every day at 11am (and a few other times each day during the summer).

We then spent the next 4-5 hours walking off the gluttonous meal while devouring the magnificent architecture of the city. We visited the Asamkirche, the Frauenkirche, the Residenztheater, and the Stadtsoper, among many other places. The pictures here don't do these incredible structures any justice - you must see them yourself! 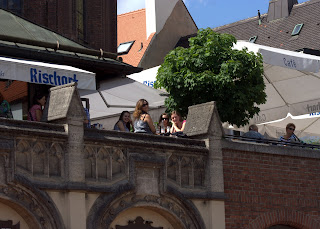 By mid-afternoon, we needed to rest and were prepared to take in more delicious tastes and sights, so we returned to the city center and snagged awesome seats on the terrace of another Richart establishment: the Cafe on Markt in the Viktualienmarkt. Here we sampled traditional Kaiserschmarrn (cut-up sugared pancakes with raisins and apple sauce). Yummy! Must. Do. More. Walking.

Next we headed to our hotels to check in and clean up (we'd now been up since 2am and were starting to turn a bit Zombie-like). We walked out to the Best Western near the main train station (Bahnhof), where our Italian daughter had a room, and then trekked clear to the other side of town where my family was staying at the Marriott Residence Inn closer to Ostbahnhof (east side of town).  Both hotels were very nice and I can recommend both, although I was a little more comfortable on our side or town. The area around the main train station is diverse and lively :)

After showers and fresh clothes, and band-aids on our blisters, we decided to drive to the Englischer Garten and substitute Beer and Pretzels at the Chinese Tower for dinner. I'm afraid the pictures from that evening escapade are not suitable for publication ;) Needless to say, we all had a great time! 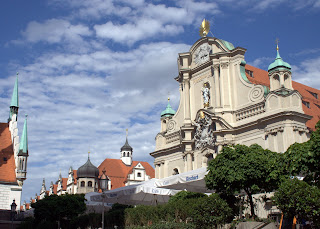 Sunday we were up and at 'em early again, as we had breakfast reservations at another amazing Marienplatz restaurant: The Glockenspiel Cafe. Ok, after this trip, I need to join a gym, because I'm not sure the intense kilometers of walking are enough to cover the calories we consumed! At least my half avocado filled with shrimp salad and accompanied by massive amounts of fresh fruit was a healthier option than the French toast with bacon :)

Again, this place should not be missed on a visit to Munich - but do make reservations; they serve the breakfast menu until 4pm, but also have lunch and dinner menus. We chose to sit outside, since we'd already witnessed the Glockenspiel - but if you want a view of the Town Hall (Rathaus) then ask for a table inside. 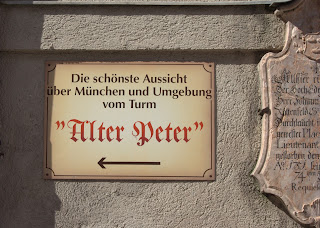 Right after breakfast, we went over to St. Peter's Church (Peterskirche) and spent the best Euro and a half per person you can possibly invest in Munich! After a vigorous workout climbing more than 300 narrow wooden steps to the steeple pinnacle, we were rewarded with the one of the most beautiful panorama views in Bavaria. On a clear day, you can see from St. Peter's beyond the other church spires to the majestic Alps.

It was incredibly windy at the top, and we were rather winded from the climb, but after catching our breath, we snapped some breath-taking photos! (How many cliches can I use in one sentence?) 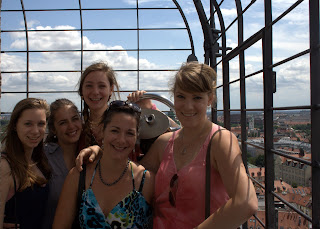 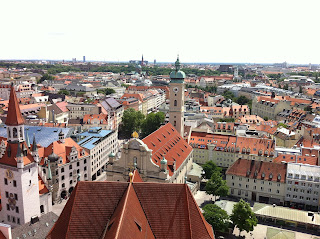 Reluctantly we eventually made our way down from the tower and headed back to the Englischer Garten. On such a beautiful day, we knew we'd find surfers at the Eisbachwelle. I'd never seen river surfing before and thought this was pretty cool. On our way there, we gawked at the naked sunbathers and stopped to take free lessons in  slacklining from a few kids who were practicing in the park. All new and fun experiences! 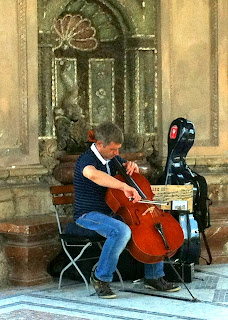 Detouring through Hofgarten on our way back, we were serenaded with a fantastic solo Cello performance.  That was easily worth another Euro investment :) We also visited the Ludwigskirche, where our German exchange daughter from summer 2000 was recently married to her Swiss love.

Finally, we met up with a group of friends at Munich's oldest continually-operating cafe: Luigi Tambosi near Odeonsplatz. Here we lingered for a few hours over Aperol Spritzes and other cocktails, just enjoying the balmy weather and the company of good friends before delivering the girls to language camp and driving back to Mülheim.

The entire stay in Munich was less than 34 hours, but we managed an impressive array of sights, sounds, tastes, and experiences. Still, there is much more to be discovered and I'm looking forward to returning in a few weeks when camp is over and my brother is visiting with his family, as well!

Anyone have suggestions for my next Munich adventure? 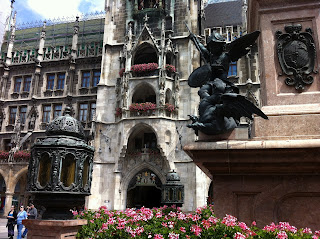 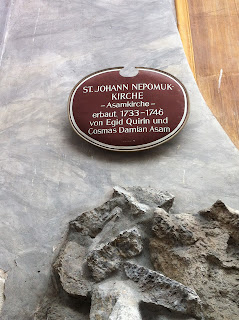 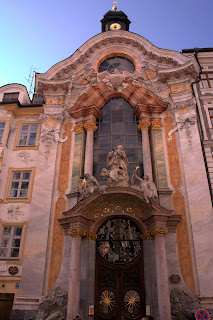 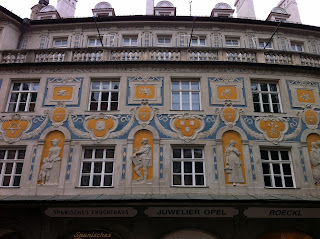 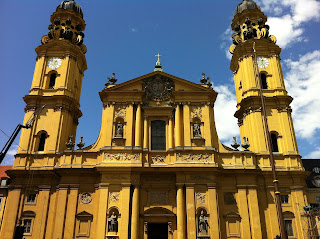 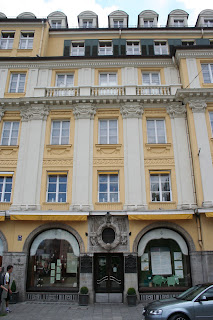 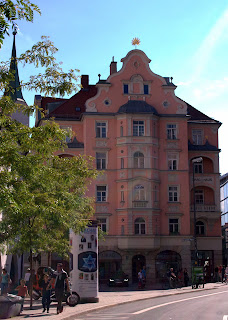 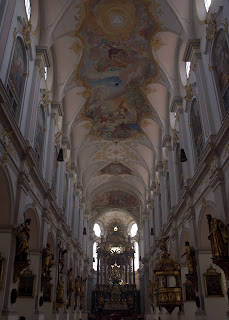 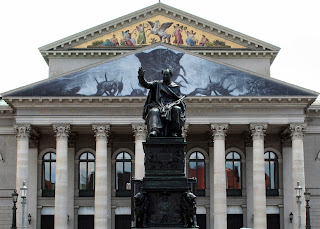 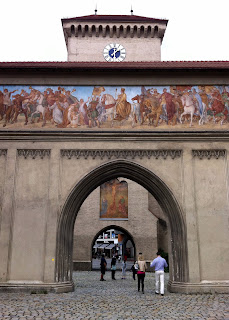 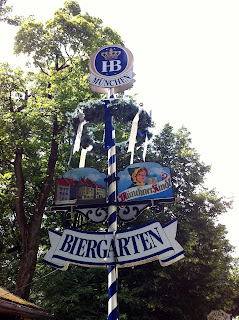