Multicultural Celebrations: The Brits are Fun! 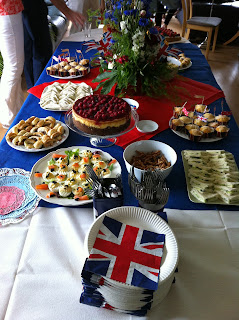 Joining an expat community here in Germany has led to lots of interesting new experiences. Many of my "local" friends are actually British - not what I expected when I moved to Germany, but it's been a whole cultural experience of itself. The Brits are much more fun than this American ever gave them credit for.

I'm learning a whole new English language (who knew "crackers" were little packages that snapped and not something you eat with wine and cheese? And don't even get me started on the misunderstanding about what a "Pantomime" is!). These are some of the things I've learned during the group's monthly Native English Speaker Quiz night. I'm apparently not as native a speaker as I thought, since I can hardly understand half the things my British friends say. Forget the Aussies, South Africans, Scots, Singaporeans, and others who share some form of The Queen's tongue...

Thanks to the Brits, I've also had the chance to try new culinary treats (marmite, anyone?) and this weekend, I indulged for the first time in a cocktail I'd never heard of, that apparently is a big hit with folks on that little island across the North Sea: Pimm's Cup. I wish I could tell you exactly what Pimm's is, but as the bottle says, only six people know the secret recipe! Evidently, it's a gin-based, herb-spiked, 50-proof alcohol that is typically blended with Ginger Ale, cucumber, strawberries and mint to make a long drink. Mysterious, but very tasty.

I've had two recent opportunities to try this new concoction. The first was a slightly bawdy Eurovision party hosted by my friend, Emma. As with the cocktail, I'd never heard of the song contest when I was living in the the land of Stars & Stripes. (OK, I didn't have a TV and wasn't even familiar with American Idol, so all's fair). The guests at the Eurovision fete were all asked to represent a participating country and come in costume (or at least national colors) and bring an international dish to share. Representing Azerbaijan, I had a tough time coming up with a recipe I could prepare from local ingredients, but I did manage to create something that had a hint of Mediterranean flavor. In another post, I'll share my Caspian Chicken Kabobs and Baklava. The party was lots of fun, with most of us gathered around the TV, sampling from the amazing  smörgåsbord (wish I had photos, but major fail on this one) and cheering our favorite contestants. I do think Germany was totally cheated. Roman Lob is pretty hot. And he can sing. Just saying :) Still, the party was great fun, and I'm grateful to the UK gal pal who hosted and all those who brought yummy munchies and taught me about the Russian Grannies. 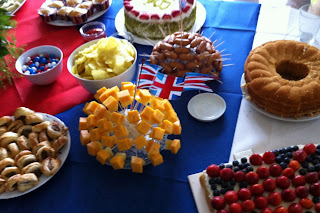 My next Pimm's party was a royal celebration of yesterday's Diamond Jubilee for Queen Elizabeth. The lovely Verena held an all British Bash at her place, which she had decked out to the 9's in red-white-and-blue swag. Seriously, the entire house was draped in bunting and balloons! It was suppose to be a garden party, but the Queen couldn't just let it rain on her parade - she sent the storms through North-Rhine Westphalia to demonstrate the extent of her reign ;) Nonetheless, we had a wonderful time, providing our own sunshine and lots and lots of CAKE. I've never seen so much cake outside of a bakery. There were cupcakes, and carrot cake, and apple cake, and lemon cake, and strawberry cake, and my white chocolate cheesecake (I'll post that one day, too) and a few others I'm not even sure of. Thank God I'm not diabetic! 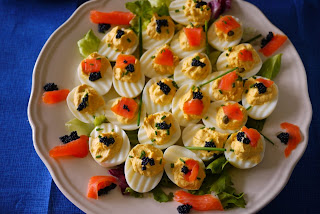 And thankfully, there were some nom nom savory items as well to counter the sugar coma. We enjoyed traditional English sausage rolls, dainty cucumber and other tea-type sandwiches, and deviled eggs with lox & caviar.
As with the Eurovision event, we gathered at times around the telly to pity the poor drenched and cold but fine-looking Royal Navy boys and admire the incredible grace of The Queen. Despite the miserable conditions of the day, the Brits home and abroad sure know how to celebrate.

Really, I think the best thing about living in Germany might just be my very fun British friends! Who knew? 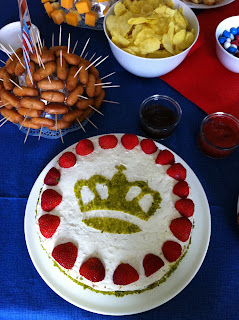 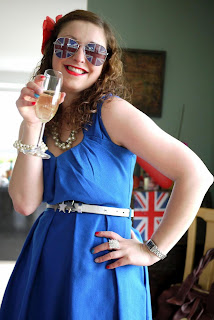