About a week ago, I thought things were mostly looking up for the kids. It's been very rough, but we seemed to be working through the challenges and making progress. I guess I was too hopeful, too soon. A new set of trials presented themselves this week and our heads are still spinning. 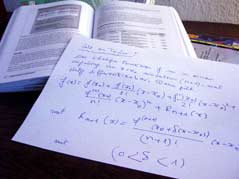 Our oldest daughter, repeating 10th grade in Germany in order to improve her German and start the required third language (in her case, Spanish), was suddenly told by the school that she needed to take a "Feststellungsprüfung" (Assessment exam) in order to determine if she could stay in school! The school director approached her and told her that she'd have to take a very important test this week in Spanish, to see if she qualified to be in the "Oberstufe" (upper-level of secondary school). This made no sense. The director told her to check the criteria for this test on the website of the regional government (Bezirksregierung). So we looked it up, read through the information, and learned this was a test given to kids who transfer from foreign countries to establish fluency in their native language (presuming it is anything except German or English) and thus exempt them from the requirement to learn a third language in the Gymnasium. It clearly did not apply to her. We tried to reach the school director to clarify this, but were unable to get her before the test was administered Wednesday morning. Nonetheless, I told my daughter to relax, and not worry. We presumed the school was just trying to give her an option to get out of two more years of Spanish lessons - in the rare event that she could actually pass the test. If she failed the assessment, she would just have to continue sludgeing her way through the additional language until she graduated. And for that we were already providing her tutoring twice a week. It would be hard, but she would make it. No worries.

Wednesday comes, and with it the test. That afternoon, my daughter calls home crying, saying she failed the test and is now being told she can't stay in school.  Nonsense. Of course she has to be allowed to stay in school. She is required to stay in school until she is 18. She is doing well in her other subjects. She is taking Spanish, like any kid who transfers from a different middle school system, and she'll be fine. Again, I tried to reach the school director. And what does the director tell me??  My daughter hasn't met the basic requirements to be in a German Gymnasium and thus can't stay; will not be promoted to 11th grade.Should not have even been accepted for 10th grade. The school director is very sorry, but her hands are tied. Hello? Are you KIDDING me???? She tells me I need to appeal to the Regional Government, but we should really consider putting her back in 9th grade or transferring her to a private, international school (BTW, that's an hour away and costs 20,000 Euros per year).

As soon as I hang up the phone, after a long, at first polite, then bewildered, and ultimately very heated and confrontational call with the school director, I call the person responsible for Gymnasium education at the regional government. I explain my dilemma and he asks me to come by in the morning.

So off I went to fight for my daughter's right to get an education.

This system blows my mind. A student in the Gymnasium has 11 to 13 courses per year. My daughter's schedule includes Math, German, English, Spanish, Information Technology, Biology, Chemistry, History, Religion, Art, and Physical Education. Every student in grades 5 through 12 has a similar schedule (with some language and arts variations). There is only one offering per class, per year. So there's 10th grade math, 11th grade math, 12th grade math, and you take each in the grade you are enrolled - just like in elementary school. You can't skip ahead, nor can you repeat a single subject you might have failed. You must pass all of your classes. If you fail one, then you repeat the ENTIRE grade, even if you excelled in all the other subjects. You cannot advance in math and science, if you fail a class in Spanish. This system seems hugely flawed to me.

It was very different in the United States, where students need to compile graduation credits over 4 years, but have the flexibility to take different classes at different times, and can even double up on subjects they are good at. So my daughter completed four high school math classes by the end of Sophomore year (10th grade) and would be taking college courses in her junior & senior years.

Anyway, we met with the man in charge at the regional government, and he was, quite thankfully, very understanding. He confirmed that our daughter did not need to take the qualifying exam and that with the grades she earned so far, and the effort she was demonstrating in Spanish, she had every right to be advanced to the 11th grade where she'll be able to enter the International Baccalaureate Diploma program, with half of her classes taught in English. He called the school director immidiately and clarified that our daughter qualified for school and earned a promotion.

Fire extinguished, time to celebrate!
Not. So. Fast.

Today we got a letter in the mail. Daughter number two is at risk of failing FIVE classes and probably will not be promoted to 9th grade. Although she was promoted last year to 9th grade, and is voluntarily repeating 8th in order to improve her German. It's going to be a long week.... meetings will be scheduled with her teachers and we will see what we can do to make sure she passes all of her classes.

One would think the school might have a little compassion for the kids and what they've been through, leaving their home and friends and being immersed in schools in a foreign country. A few months ago, the school virtually assured me they would pass the kids this year, with the understanding that they need a year just to get adjusted to the language. Why they are now being so difficult is incomprehensible.

The kids are frustrated and hurting right now. Say a prayer for the kids. Wish us luck.
Posted by ~Karen at 3:00 PM